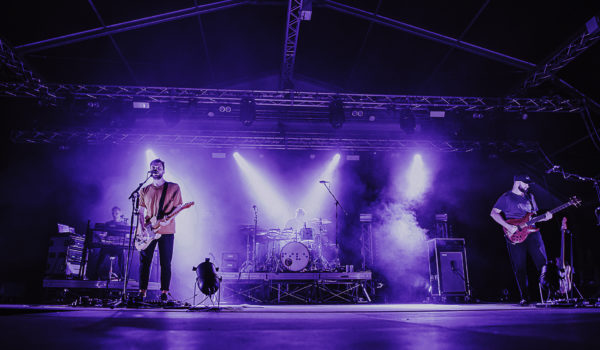 Interview and photos by Oriana Spadaro

A few hours before their concert in Milan on the 29th July, we had the pleasure to meet the frontman Harry McVeigh for a chat about the last album “FIVE” and much more…

How are you? How is the tour going?
Good, we are having a crazy busy summer. We had a few weekends in the festivals, it’s been fun. Very relaxed also as we had a couple of days off and we arrived in Milan yesterday.

It’s not your first time in Milan, do you like the city?
I’ve been many time and i like it, there are many cool places to eat and drink. Yesterday we went to villa Necchi, very cool.

Which is the country where you like playing the most?
I don’t really have a favourite. We have a really good crowd everywhere, passionate people who like to sing along. Especially across Europe we do very well. We are very lucky to be able to tour and play everywhere from east to west. Super fun playing everywhere.

Let’s talk about your new album, “FIVE”. You’ve said that it’s a new chapter. What do you mean?
I think it’s a new chapter for few reasons. When we started working at the album we were approching ten years of being in the band. We felt a lot of nostalgia while making the album. We were thinking a lot about our career and how far we have come. And I think also we were thinking a lot about wether we really wanted to carry on and to keep doing it. This album showed us that we want to keep doing it for a little while longer and keep making music and keep touring.
We have been gradually learing and evolving over the years and I feel we are getting better. The songs that we write are better now than they were and we are better at playing and performing. From beginning to end making the album we felt like we have put together some of our best work. It’s a new chapter because we really know what we are doing now. We know how we like to make music and how to perform it. It’s taken a long time to learn.

So you consider yourself more mature from the technique point of view but also as far as the lyrics are concerned.
Yeah, Charles writes all the lyrics. I think he has refined his lyrics a lot, actually. Looking back on the first album coming out ten years ago and listening to it you do realize how young and naive we were. You can hear that a lot in the music – which I love actually because it reminds me so much of that time – but in the lyrics there’s a lot of naivity and teenage angst and melodrama.

In fact I think that in “FIVE” the atmosphere is less dark and more shiny and positive. Songs like “Tokyo” and “Believe It” give me a feeling of infinity and freedom, so I guess it’s like you are feeling better, aren’t you?
Yeah we are just more showed. We know who we are more. And i guess that makes you happier, probably.

If you could go back in time with a time machine, would you change something in your career or would you do exactly the same?
It’s very hard to say. I think there is always things that you regret later. Some music of the second album, especially. It would be nice to go back and do it better but I think that without doing all those things we wouldn’t be where we are now. You have to do a lot of mistakes. There is nothing I regret that much. Everytime we have written and recorded music we have always done what we felt was best in that moment and I think that’s all we can do.
There is a lot of moments I’d like to go back to, to live throught them again as we had some memorable experiences being in the band, a few shows in particular like the first time we played Glastonbury festival, Jools Holland and the first time we travelled to Japan and USA. It would be nice to feel that excitement again.

Do you think that music business has changed during these ten years?
Of course. With streaming especially that has totally transformed the way people listen to music. In some ways it’s really good. I have Spotify and I listen to it all the time and i think it’s great. It’s an amazing resource to have in your pocket where you can listen to pretty much all of the history of recording music. Now it’s a totally different world, it’s harder to make money selling albums and it’s harder to make album for that reason. You don’t have much money to spend when you go recording and you have to rethink about how you can do it, how you’re going to spend the money that you have and you have to rely more on playing shows and travelling a lot.

Do you think that the Brexit will affect the music industry somehow?
I think Brexit is a disaster in general. In the music industry especially. I think it’s really damaging because music industry is one of our greatest exports to the world, it spreads UK culture everywhere and it’s so dominant. It’s not just us, it’s all of our crew, it’s the people who sell our music around Europe, the people who work in the venues, who put the lights on, who build the stage. It’s really important that we do not lose that. I think it’s going to make touring much harder for UK bands if we leave. But who knows what’s going to happen, we have to wait and see.

I know you have a particular way of writing your songs. Can you tell me more about it?
We have been writing songs in the same way for very long time, probably from the second album. I have a small and basic studio in my house. We just sit at the laptop and play some keyboards, really simple sounds, some chords. Charles writes some lyrics and I write some melodies at the same time and very quickly you can tell wether a song is going to work or not. We write about 50-60 songs for an album. With the songs that we really like we try to figure out how they are going to sound if a whole band is playing on them and then we take them into studio. We often keep quite a lot from what we do at home and then in studio we add the drums and guitars. Charles is very talented in writing lyrics very fast. Charles’ lyrics are very honest, he writes from the heart. That’s why people often connect to the lyrics. They speak about universal things that people think about all the time.

So you don’t tell white lies in your songs..
We chose this name because it sounded cool, bands’ name are bands’ name. There is no deeper meaning, they are just two words that sounded cool together.

You have been compared often to bands like Joy Division and Interpol but in the past you have said that they did not influeced you so much actually. So I am curious to know what are the bands you like and what are you currently listening to.
I think the comparisons to the whole 80’s post-punk scene probably came about through the music that we were listening to when we were teenagers. Interpol were actually a huge band for us, we used to listen to them a lot, we loved their first three records. But we listened to bands like the Talking Heads a lot more. The music they wrote was very serious and thoughtful and and I think we borrowed a lot from them.
We have listened a lot to Joy Division and New Order much more since we have been compared to them and I love their music as well.
I don’t really listen to rock music at the moment, I listen to a lot of classical, music, I love Bach especially. I listen to him all the time and if I have spare week at home I play him on the piano. I recommend him, he’s great!

Which are the songs you enjoy playing live the most? And the ones you are getting bored of?
I like all of them to be honest. We are lucky to share our taste of music with our fans. Often the songs we want to play are the songs they want to hear. We try to put some songs from all the albums and get a good mix. In particular on the new album I really enjoy playing a song called “Kick Me” as it’s different from all other songs, it’s slower, more prog rock and psychedelic in some way.
Usually when we get bored of the songs we just take them out of the set. We change a lot, tonight we are going to play “The Price Of Love” from the first album which we haven’t played for long time.

Plans for the future?
We have a tour for “To Lose My Life” at the end of the year playing the album in its entirety. It’s going to be very nostalgic. We haven’t played a lot of songs since then so it will be interesting to see how they go down. I guess we will think about making another record at some point, maybe next year.

..and I guess the title will be “Six”
Maybe yes, maybe yes!